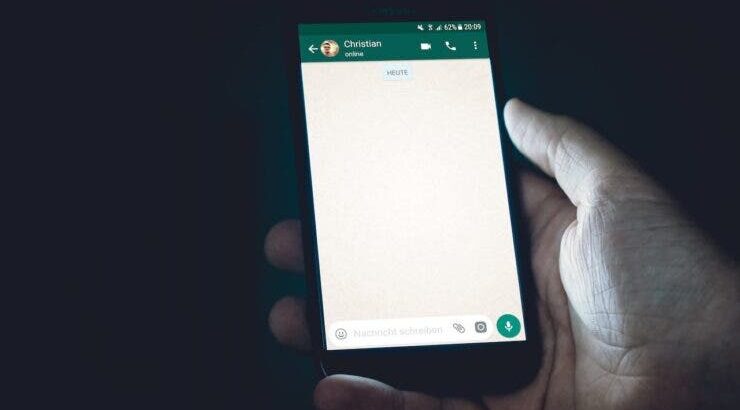 Suddenly, Martha was alone. She had moved in with her boyfriend Ash and, shortly after, he was murdered. Without her being able to say goodbye, suddenly. But, What if I could keep in touch with Ash? What if you could talk to him via video call, as if he were just traveling? This is the story of Right Now I’m Back, one of the best-known chapters of Black Mirror. In the series, Martha ends up hiring a replica of her boyfriend with whom she begins to live. This last part is still part of science fiction, but not the fact that we can use chatbots to ‘resurrect’ the dead.

Ash constantly recorded everything and commented on it on social media. Without being aware, I was giving away a database for the company that later collects all that information in order to create a digital version of itself. He was programmed to give the same answers he would give if he were still alive, and the company knew that because it had all the records of his interactions. Outside of the fiction of the Netflix series, there are several companies, such as Replika, that already work on these chatbots. In the United States they are called griefbots because they seek to deal with the grief of the loss of a loved one.

The first debate about this technology focuses on whether it is ethical and positive that chatbots to ‘resurrect’ the dead are used to overcome death of someone. It is precisely this type of discussion that is being carried out in a study conducted by the Open University of Catalonia (UOC) and the University of Aalborg, in Denmark, Yorokobu compiled.

Belén Jiménez Alonso, PhD in Psychology and principal investigator of the study, indicated for the UOC that griefbots are presented as a modern version of mourning rituals and that replace the classic ways like consulting a photo album or organizing a funeral. “From their point of view, griefbots would fulfill a positive psychological function in the grieving process, allowing people to interact in a more sophisticated way with the memory of the deceased person, commemorating their life and thus helping to keep their memory alive “Jiménez Alonso told the UOC.

Despite the fact that chatbots to ‘resurrect’ the dead are not being used -for now- social networks have already been in charge of create digital memories of the deceased. This is the case of Facebook, which converts the account of a user who is no longer in a memorial. In reality, visiting these pages is like visiting a photo album. Being able to talk to that person as if they were still alive is something else.

In South Korea, the documentary Meeting you broadcast on a local network put the debate on to what extent it can be healthy to “meet again” with a deceased loved one. It was what Jang Ji-sung did, a woman who lost her 7-year-old daughter to illness. Using virtual reality, a team recreated the girl’s image and voice so her mother could say goodbye to her.

In the video of the “reunion”, the mother cries when she sees her daughter and tries to hug her, although it is a hologram. “Mom, where have you been? Did you think of me?” Asks the girl. Nail images of anguish That caused a stir from many viewers, who did not see any positive points for the mother and her process to overcome the death of her daughter.

Psychologists do not have a general opinion on this. While some believe that speaking or seeing a deceased loved one again can be a good way to deal with trauma (especially if that person has died prematurely), others claim that these digital encounters can cause more pain and lengthen the grief.

My friend is a chatbot

It may seem like chatbots of deceased people are part of a dystopian future. But we are not that far. In addition to the studies that achieve great advances, there are companies that are already dedicated to chatbots as a substitute for natural persons. This is the case of Replika, the app that offers you Virtual “friends” to chat with. These types of chatbots have also been very useful to provide psychological help and have been great allies during the quarantine due to the coronavirus pandemic.

In the specific case of griefbots, several researchers are working to improve the technology. One of them is also one of the forerunners of this type of virtual reality. Eugenia Kuyda is the co-founder of the artificial intelligence company Luka, which is also behind Replika and the one who launched the program that allows interact with his friend Roman Mazurenko, who died in 2015.

Kuyda, after the sudden death of her best friend, collected all the messages I had from him to create the bot that could imitate the way you speak and even certain aspects of your way of thinking. The result was Romanbot, an experience that divided Roman Mazurenko’s family and friends. While some stated that they found many similarities between the chabot and his friend, others saw it as a dark experience that did not make them feel better after the death of their friend.

Hossein Rahnama is another of the researchers working on future griefbots created from personal data. The expert indicated that a person can reach store a trillion gigabytes of data throughout its life and that with that file it is possible to create a digital version of oneself that reproduces not only the way of speaking and physical features, but also the jokes or tastes of a person.

Currently, it is difficult for someone to have collected all that amount of information through social networks because we have not been living with them for so long. According to Rahnama, those who are now millennials will be able to have this file in 2070. At that time, a database could be created with all the Emails, text messages, photos, tweets and even Instagram Stories of a person. In addition to creating a digital version of her, the goal is for her to also develop new opinions about events that have happened after her death.

A memorial in exchange for data

The advances achieved so far are based on the findings of the last century, such as the ELIZA robot. Although research has improved the technology, today’s chatbots are still far from looking like a human. But each time it gets a little closer.

Machine learning and deep learning have made assistants like Alexa or Siri give us increasingly accurate answers and have fewer limitations in their language. A few years ago, irony or sarcasm did not enter the catalog of knowledge of the attendees. Today, although with imperfections in some cases, we can have coherent responses.

This technology will continue to improve, but the challenges for griefbots go far beyond technical innovations. One of the most controversial points of chatbots to ‘resurrect’ the dead is the privacy and the implications of a digital legacy. The most staunch critics question how a good use of the personal data of a person who has passed away can be guaranteed. In a few years we may be able to get to the point where a person chooses what information they want to be used to build their digital version. But, at the moment, this scenario does not seem realistic.

In cases like Romanbot’s, her best friend was the one who decided what data to include in the file. But what if it includes information that your friend I did not want it to come to light? It is possible that Roman Mazurenko interacted differently based on the people he encountered and it is very likely that he wanted the image that each had of him to be the same after his death. In any case, the young man was never able to review the information that was collected in his chatbot.

How we can deal with these dilemmas and if we really have to do it is still unknown. What we do know is that there is a program that can completely change the way we deal with death. What if we never had to say goodbye to a person completely? What consequences would that have for our mental health? A digital version can never replace the real version, but thanks to the first one, we could always have contact with our loved ones. Not even death could prevent it.

The article Chatbots to ‘resurrect’ the dead are no longer just a ‘Black Mirror’ thing was published in Hypertext.