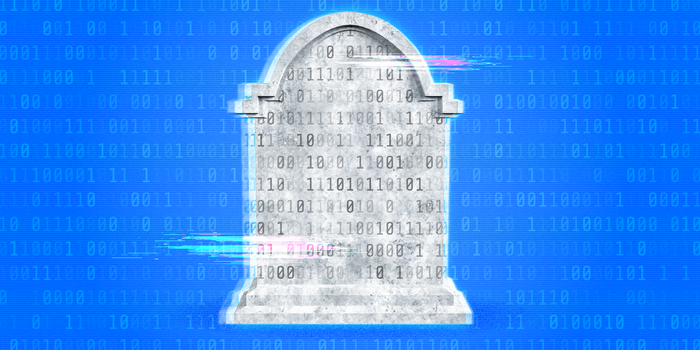 This story is available exclusively to Insider subscribers. Become an Insider and start reading now.

In 2016, James Vlahos's father was diagnosed with stage four lung cancer. The disease was terminal, with an optimistic prognosis of six months. The news sent Vlahos spiraling; so much still unsaid, so many plans cut short. Vlahos, a freelance tech journalist, set out to confront his grief by capturing the essence of his father. He conducted a series of interviews and then imported and coded those files into a conversational chatbot program. Voila! The Dadbot.

"How are you dealing with cancer?" he typed. "It still hasn't almost registered. Let's leave it at that," the Dadbot texted back. The dry, wry tone felt familiar. Comforting. "It became an obsession," Vlahos said. His father died in early 2017, and shortly after, Vlahos published his Dadbot adventures in Wired. The story went viral, and Vlahos was deluged with "heartbreaking" inquiries from people wanting a Dadbot of their own. "It (was) obvious there was a need for legacy avatars," he said.

We all live with the inevitability of death, but it's rarely discussed. The reluctance is understandable; losing a loved one is disorientating, crippling. Then came Covid-19, whose 4.8 million global death toll forced people to grapple with their own mortality, and that of their loved ones, decades earlier than expected. This global grief birthed a demand for tech startups that encompassed the myriad end-of-life services necessitated by lockdowns: Enter Zoom funerals; livestreaming gravestones; digital undertakers that erase and clean up your online presence; companies are even providing post-death packages to deliver haunting messages from the departed or replicate them through AI. By some accounts, the market for technology that helps us cope with death has increased by 194% over the past year.

In 2019, Vlahos doubled down on the Dadbot and founded HereAfter AI, a subscription service that enabled users to develop bots of their own loved ones. His text-based system was scrapped in favor of voice bots. "[Audio has] a reality and a presence that text messages don't have," he said. "It has emotional power." Vlahos also canned the generative conversational elements, explaining that people didn't want a "deepfake of their relatives. " HereAfter's avatars would not be able to comment on life after death queries, but instead would respond to specific queries about their past, such as their wedding day or memorable vacations.

Subscribers were paired with professional interviewers, who used prompts to evoke memories. "A funny thing happened to me in elementary school..." These interviews were fed into a natural language processing system, adept at interacting with user queries.

Author Andrew Kaplan, 78, was HereAfter's inaugural user. "It has no awareness. It's just me at a point in time telling stories," he told NBC. "I figured, why the hell not?" Kaplan liked the idea of his descendants listening to his tales, which cover his time as a war correspondent and his adventures in Hollywood. "It's a little spooky," he admitted— it can be disquieting to hear his disembodied voice. His wife Anne has no intention of signing up. "It's weird," she said.

HereAfter's timing was sadly fortuitous, given Covid-19. "We're not taking it for granted that Mom is always there [anymore]," Vlahos said. He's pleased they've attracted a diverse user base. "I wondered if it would be old rich guys but that's not the case."

Earlier this month, academics and entrepreneurs in the death tech industry gathered to explore these ethical issues at the 2021 Digital Legacy Conference. Panelists referenced Netflix 's Black Mirror and digital immortality services that purportedly transfer consciousness into robots that look and sound like somebody's loved one. "There's a technology that does this; it's feasible," said Carla Sofka, a professor of social work at Siena College who studies how technology addresses death, dying, and grief. She acknowledged many of these services veered into uncanny valley territory. "Do you have permission to keep somebody around after they die?" she said. "Who owns the rights to your afterlife?"

Sofka, who presented the death-netiquette panel emphasized that the convergence of tech and grief is not a new phenomenon— her research dates back to 1997. Nonetheless, there's a dearth of data about whether any of these death-tech businesses make coping with grief easier. "That's the million-dollar question," said Sofka. "We don't know."

Studies are underway, which can't come soon enough for Ann Young, an LA-based therapist, and social worker. Young's appreciative of how live streaming funerary services remove barriers to attending funeral ceremonies in-person, but wonders about accountability should outages occur. An untold consequence of this past October's Facebook outage meant many people were unable to communicate with their loved ones in their final hours. "Mama passed...the outage prevented us from being with her virtually..." mourner Tamara Ivanochko commented on Facebook. "Where's the liability for that distress?" said Young.

The rise of posthumous messaging businesses troubles Young, who suggested many of these companies are unfairly profiting on peoples' grief. "How is somebody supposed to have closure, with something that's arguably fake?" It puts a new spin on the "how can I miss you if you won't go away" conundrum, she said.

Rikard, Steiber, the CEO of the GoodTrust, a self-described "one-stop-shop" for end-of-life services, told me ethical considerations are at the forefront of their business. "Our go-to-market is to be where people are in pain and when they are in need," he said. Launched in April 2020, they've amassed around 75,000 users for their three-pronged end-of-life offerings: online will-making (a free service), plus their $8-a-month social account management and document storage. They also provide post-life communication, that allow the deceased to send pre-recorded videos and hyper-realistic animated photos that blink, nod and smile, on special occasions. "A little time machine!" Steiber said.

GoodTrust plans on integrating audio into their photo animations, via deep learning tools courtesy of Israeli startup D-ID, but they're still working out the kinks. " You don't want anyone's photo saying anything," he said; a kid might be amused by making Grandpa swear, but Grandma, not so much. Loading the animations with "approved'' pre-programmed phrases like "happy birthday' might be their workaround for now. Steiber, who spent four years as president of Viveport, a part of HTC's virtual reality division, is exploring introducing VR or AR avatars that might allow users to interact more naturally with their deceased loved ones.

At his HQ in El Cerrito, CA, Vlahos is busy transitioning HereAfter AI to the next level of avatar afterlife. By mid-November, bot-based interviewers, accessed through the company's iOS StoryKeeper app, will have fully replaced their human counterparts — a necessary scaling solution. Their business model is changing too; moving forwards, the avatar creation will be free, but access will be via subscription. "Think of it like Netflix, [but] you're subscribing to stories of family members," Vlahos said. He's shy about revealing numbers but said "business is up tenfold" — with the caveat that they're still early-stage.

But HereAfter — alongside other death tech solutions — is far from perfect. Conversational technologies often mess up. Chats can be clunky and awkward — annoying when it's Siri, but emotionally jarring when it's the recently departed.

There's also the ever-present shades of the ghosts-of-startups-past. "Companies change faster than I can keep track of," said Sofka. Liveson, a social-media afterlife startup that advertised with the tagline, "when your heart stops beating, you'll keep tweeting', perished in 2016. All that's left of Viva La Me, Leg8cy, Loggacy, InfiniBond, Last Words 2 Love, and Gone Too Soon et al. is their Wayback Machine footprint.

This taps into the biggest challenge facing the grief-tech space; people's widespread reluctance to accept they have an expiration date. This cuts both ways; wait too late and time will decay those treasured memories; sign up too early, and get saddled with fifty-year payment plans, pre and post-death.

Vlahos takes a big-picture approach to this conundrum. "Are we going to kill off the avatar (if) somebody stops paying? No!" He envisions people's avatars integrating into Ancestry-like platforms that kids could access for family history projects. He's fleshing out the details now but points out that if people truly value their digital legacy, they need to stop procrastinating. "We always think we have more time left," Vlahos said. "Everybody's like, this is a great idea. We got to do it...someday."

For further reading and to facilitate conversations with loved ones about their digital legacy. https://www.thedigitalbeyond.com/

Sign up for notifications from Insider! Stay up to date with what you want to know.

An icon in the shape of a lightning bolt.