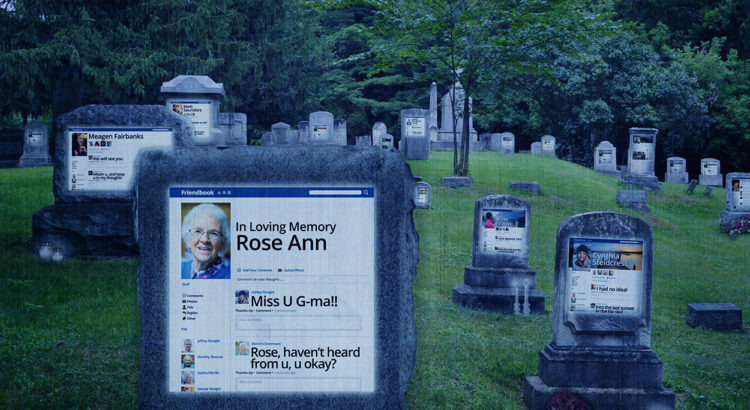 
Social media is turning into a vast graveyard for profiles of owners who have passed away, leaving them unattended or as standing memorials. And some experts are urging social networks to do more to help users prepare for their digital deaths.

There are millions of them – pages that remain on social media sites, and in some cases, automatically update after their owners’ death.

The numbers vary from 5 million to as many as 300 million, according to Jed Brubaker, a digital death expert with the University of Colorado, Boulder. But it’s hard to know the exact numbers because “tracking the rate of death across the world is hard,” he said.

Facebook, in particular, has millions of dead profiles that could overtake those of the living by the latter half of the century, if the social media giant fails to grow its user base further.

Social media was developed as a place for people to connect with friends, family and colleagues. And Brubaker’s research shows this continues to be the case even after people have died.

“We turn to social media profiles as a way to remember, to reflect on the memories of loved ones, or to remain connected to them and remind ourselves of who or what they meant to us while they were alive,” he said.

But unlike funerals, typically attended by relatives, friends, and acquaintances, social media breaks down space and time barriers. A post about someone’s death reaches friends and strangers around the world. Sometimes people don’t see it until months later as it gets buried under a deluge of information.

Facebook alone shares up to 4.7 billion pieces of content daily, according to Ken Huening, founder of MiLegacy, a media archive service. When something is posted in the morning, “if you don’t look on your Facebook [account] until later in the evening,” he said, “you have to scroll through a number of different top topics and various different people” to find what you are looking for.

“People get information about death the way they might learn about “the latest political update or shoot viral cat videos,” said Brubaker. “And this is in contrast to what we historically might have thought of as a fellow picking up the phone and calling you, and learning about it in a more intimate and supportive conversation.”

Some death studies experts, noted Brubaker, argue that social media is “repositioning” death back into everyday practices as a way to keep information about ancestors present for reflection.

These are memories and photographs that often are tucked away in physical scrapbooks and photo albums. And they are the things people risk their lives to save when disaster strikes.

But in a world that increasingly digitizes everyday life, these prized possessions are now on smartphones, social media sites, and cloud servers. When they disappear, then “what we’re losing is actually all the photos that maybe ever existed of those people,” said Brubaker.

Yet his research shows that people tend to de-prioritize non-material things, so they defer making decisions about the fate of their digital assets. At the same time, when asked about the experiences they’ve had with loved ones and their digital memories, people spoke about “the immense, incredible importance of those spaces,” he said.

Services like MiLegacy are filling the gap. Registered users can upload the memories they have on their phones to their profiles, where they can curate them and share them with trusted contacts. And with the “time capsule” feature, users can leave audio and written messages for their children and grandchildren “that will post in the future,” said Huening.

These types of services are relatively new. Some, like MiLegacy, let people save their digital credentials to pass on after their death to designated caretakers. The process takes away “from having to go through a whole legal process,” he said.

Brubaker said social media services also should do more to help people decide the fate of their digital profiles. And he has been working to reconcile the living and the dead on social media by figuring out “how postmortem data and how our digital legacies can inform our lives today and encourage us to be more reflective.

“There’s a bit of an irony with social media,” he noted. “We’re so bent on capturing our social lives that maybe we need to pay a little more attention or at least build up the policies or tools to let users make their own choices for what is inevitably one of the most important social things that will ever happen to us, which is our death.”