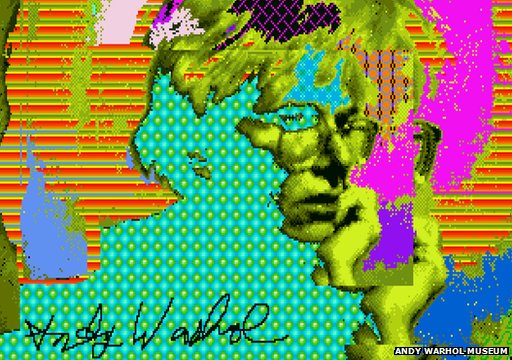 A dozen previously unknown works created by Andy Warhol have been recovered from 30-year-old Amiga disks.

I find this story interesting for a couple of reasons.

First, that Warhol, one of the most iconic and controversial artists of my early years of media awareness, would experiment with the then new process of computer art. I know he was probably paid a boatload of money to help promote Commodore’s new machine and already had the kind of personality open to this kind of new, but still it’s fun to consider an acclaimed cultural figure working in 32-bit color.

However, beyond the artistic aspect of the discovery is this: “A painstaking three-year project was required to recover the images which were saved in an obscure data format.” [emphasis mine]

Many of us consider work in digital form to be more durable than that stored on old fashioned, very fragile paper. Able to be infinitely duplicated so that copies will remain somewhere for centuries. Out there, in that cloud thing. Or the Google.

But what happens when the first drafts of the ground-breaking, historically significant, Pulitzer-prize winning novel written by one of our students is stored in a format no longer supported? Scholars are still finding the early paper-based revisions by important writers of several hundred years ago, in a language not very different from that used today. Warhol’s Amiga-based masterpieces were made less than 30 years ago in a now obscure format.

Not too long ago someone brought me a 3-1/2” floppy disk with some far less significant but personally important files written in ClarisWorks asking if I could open them. Given enough time, far less than three years, and a compelling need, I could probably make it happen, but that’s just one of many examples of once-popular file formats, now abandoned in the relatively short timeline of digital media.

Anyway, something to consider when you and your students decide where and how to store the important work you’re doing, the stuff that will be unearthed by archaeologists in the future and used to write the history of the early 21st century.