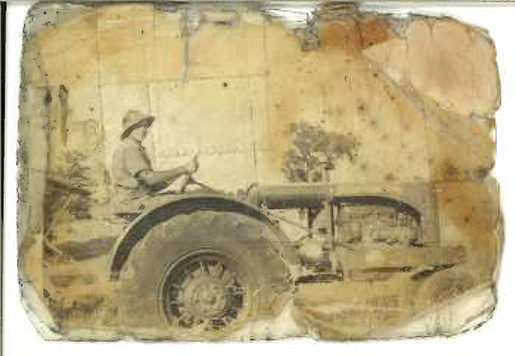 He was a farmer and mechanic. On the farm, we had a dairy cow, about 40 head of cattle and we planted corn and soy beans.

Growing up I spent a lot of time on back fender of his tractor until I was old enough to drive one (I think around 6 or 7).

I learned a ton from him – about hard work, perseverance, and a few mechanical skills. I miss him a lot. Especially now that I have a family of my own. It would be great to understand what he thought about his situation and how he dealt with life’s ups and downs.

But he didn’t leave a lot of things behind. Great memories for sure, but nothing really written down.

If he had I would go back to those writings quite a bit.

I would look to what he said and how he said it. I have just a few of those grandpa quotes I remember – one of my favorites that he would say to grandma at the end of night when company had overstayed their welcome.

“Come on, Mother. Let’s go to bed so these people can go home.”

He had a twisted sense of humor.

I wonder if he had the ability to write down his everyday thoughts, would he?

Probably not. But if he would have created the text, the pictures, the video, the vines, whatever it was – I would read it all, over and over. I respected the man quite a bit but I don’t remember much about what he thought. I just have a few pictures and a bunch of hazy memories of my childhood.

When I think of the opportunity that social media has given me, it kinda blows my mind. You have any opportunity to share with generations that only a handful of people have done in the past.

You can give you minute-by-minute updates of your life in real time. You can follow and learn as much as you want from others.  It’s amazing how connected and documented we are now. We all have audiences – and these audiences actually care about what we are writing.

What do you think about these digital tools documenting your life?

But it’s more than that.

We are essentially writing the books of our lives with ongoing commentary of friends and family and, maybe some detractors as well. That’s a lot different than a normal diary.

Yes, I keep in mind very well the people that are in my social networks when I’m sharing information. I want them to respond to me and I want to be a value add to their days. But I also need to keep in mind my future generations. The sons of my son, the daughters of my daughter’s daughter.

They will be influenced by what I say here because this will be my only voice after I’m gone.

I say all of this not because I want to scare you into deleting your Facebook account. We have all probably vented a few times too many, gone off on a rant or posted photos that could be taken out of context.

No, I say this, because I want you to keep sharing. I want you to pass along your wisdom to future generations and share with them what it was like to live at this day and age.

The stuff you do daily is actually very important.  If you are farming and sharing that information, there’s a good chance that the people who stumble across your blog or Facebook page or twitter profile aren’t connected to that lifestyle.  The daily stuff is new to them and very interesting. It’s not something they experience everyday.

And when generations look back like we do at the 1800′s when people were documenting their lives to share with others via mail but our future will definitely want to look into the past for insights. The sunrises you saw, the work you were passion about, the people you spent time with, the adventures you have are all part of this crazy social media world and it will be available forever to them.

So maybe this post is a little too sentimental. And maybe it’s not “real” enough because I edit out of social media some things that might be a bit too controversial for my future generations and my audience. That’s ok – I’m not and you aren’t – being graded on this.  You can share the controversial – sometimes that makes for lots of discussion – but just remember to be civil and kind.  It’s ok to disagree. It’s not ok to be a jerk.

I just want the future gens to trust me (even if all they know about me is what they have seen when I’m an old man who couldn’t have possibly been young at one time) and know that I thought about them when I was creating. I shared because I cared about them.

So I’m hoping that grandpa would have blogged had he been given the chance.  This way I could go back and visit with him even after he’s gone.