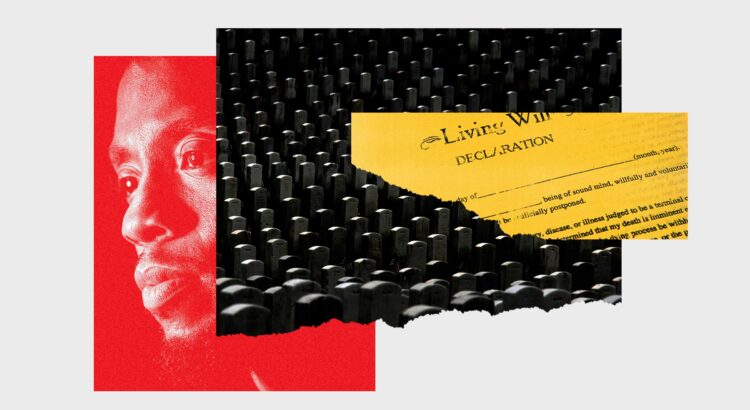 What Are You Going to Tweet After You Die?

The artful death announcements of Chadwick Boseman and MF DOOM show us how the way we die online can help the living grieve.

Save this story for later.

The most-liked tweet of all time comes from beyond the grave. “It is with immeasurable grief that we confirm the passing of Chadwick Boseman,” the post begins, tweeted on August 28, 2020, from the actor’s account. “Chadwick was diagnosed with stage III colon cancer in 2016, and battled with it these last 4 years as it progressed to stage IV.” That he was even sick was shocking news to most of the world. Anticipating his fans’ bewilderment, it continues, “From Marshall to Da 5 Bloods, August Wilson’s Ma Rainey’s Black Bottom and several more, all were filmed during and in between countless surgeries and chemotherapy.” The heartbreaking kicker is what’s beside these 135 words, a black and white photograph of Boseman, likely taken sometime between those many surgeries. His head playfully tilted, he flashes his signature smile—as vivacious as most assumed he was until seeing the post—his gleaming, wry gaze fixed somewhere above and beyond.

More than the fact that Boseman was beloved across many demographics, and that he died just as the collective trauma from the pandemic was fully taking hold, the main reason this tweet has garnered more than 7 million likes and 2 million retweets is that it’s a poetic death announcement deftly tailored to social media, crafted by either Boseman himself or his family. The straightforward revelation of his illness, the bioluminescent photo, the elegant reflection on his place in the world—“It was the honor of his career to bring King T’Challa to life in Black Panther”—stood out among the torrent of riffraff in everyone’s Twitter feed, and in turn set the terms of Boseman’s legacy. It’s not a stretch to say this tweet is among the main reasons why, earlier this month, Marvel Studios announced it would not recast T’Challa in any Black Panther sequel.

Four months after Boseman’s death, on New Year’s Eve, another beauteous, haunting death announcement appeared, this time from the Instagram account of Daniel Dumile, otherwise known MF DOOM. Beneath a photo of the mysterious, literary rapper in his signature mask while posing with bravado in a New York Knicks jersey was a touching declaration of love and gratitude from his wife. But the only reference to his death, and a cryptic one at that, appeared in the final words: “Transitioned October 31, 2020.” That is, his family revealed his departure exactly two months after he died, in the final moments of a year riddled with mass death and suffering. It was eerie yet perfectly appropriate for the famously reclusive, ambitiously anonymous artist. (His cause of death has never been publicly revealed.)

More than cementing their own legacies, Boseman and Dumile’s death announcements are urgent inspiration to shape our own, by being more imaginative with how we share our deaths online. They are high watermarks of what’s possible if we bring the death with dignity movement to social media. If we have any online presence, knowing how to die online should be as central to our deaths as our wills and burial plans.

In the corporeal world, dying with dignity is the focus of research programs, schools of ethics, and legal frameworks. But our digital afterlives are largely afterthoughts.

Few people “plan for how their own deaths will impact social media,” says Katie Gach, a digital ethnographer at the University of Colorado, Boulder, who studies how people manage, and don’t manage, post-mortem social media data. To some of her subjects, “legacies” are reserved for celebrities, so “regulars” like them need not consider a parting note. If people do think about their social media legacy, she says, “they only know who should be making those decisions after they have died,” like telling their spouse their Facebook password to delete their account. Beyond that, most see social media as the wrong medium for the message, “as a tool for communicating in the moment, not as a meaningful record.”

Beyond this, decades into the internet being a daily part of our lives, most of us still either don’t know how to or are too uncomfortable to grieve online. In a 2017 study, Gach and fellow digital death researchers Casey Fiesler and Jed Brubaker found “grief policing” to be common online, where users import social norms of grieving into social media. This leads to bitter disagreements about what’s appropriate, and often shaming individuals for not expressing enough grief, for seeking attention through public grief, or exploiting death for personal gain.

For all these reasons—along with good old-fashioned fear of death preventing any planning for our ends—the vast majority of online death announcements today either feel like or are literal copy-and-pasted versions of the rote local newspaper obituary. Because this formula—date of death, age, who the deceased is survived by, where to send money in lieu of flowers—is all data, no life, these messages often get lost in our endless newsfeeds. Person A switched jobs, person B is divorced, person C died, Pete Davidson got a tattoo of Salt Bae on his thigh.

Why should we care how our deaths look on Twitter when we’re dead? While Mark Zuckerberg’s metaverse announcement earlier this fall was met with mostly jeers, eyerolls, and trepidation, it should remind us how close society is to a world where the digital space is a part of our corporeal (and not only experiential) being, where institutions like birth, love, and death have the same gravity as they do in the physical world. To prepare for this Ready, Player One existence, we should start to think now about the ways to curate this world with the tools to die in a meaningful way.

Thankfully, there are already communities that are helping to craft the art and ethics of dying gracefully in cyberspace. Megan Devine, a psychotherapist, has created Refuge in Grief, an online community that focuses on reframing grief as an illness or problem to be solved to one built around compassion and understanding. Another community, the Order of the Good Death, even uses the slogan “Welcome to the Future of Death,” as a portal to critical questions about death, like how to make it more eco-friendly and equitable. The “death positive” movement, which aims to remove the taboo around talking openly about our own deaths, has also had room to flourish online, where the disembodied forum has allowed for people to more easily move beyond the taboo. Even social media platforms themselves have started to wake up to death. After years of complaints, Facebook, which has a lot of control over how grieving unfolds, in 2019 started to allow a legacy contact to have more control over the activities of the deceased.

But the most important element of the art of dying online is the personal one: how we, as individuals, control the tale of our deaths. Cases like Boseman and Dumile highlight that digital death is an arena where we can both seize control and even give life after we’ve stopped living. Not unlike a living will, we should all consider the way the news of our deaths is shared with the world. These details could even be included in our wills. And they might include:

Picking the platforms where news of your death is announced. Maybe you think Twitter is too much of a cesspool to serve as a vehicle. Maybe TikTok’s lighter tone better matches your spirit, and you want to be honored by your family choreographing a dance to your favorite song. Or maybe a closed Facebook group is ideal, where the interactions can be more intimate.

The exact audience that news of death is shared with. Instagram allows one to curate the recipients of a given story. Maybe you don’t want coworkers to receive a story about your weekend adventures in Las Vegas. Or, maybe you want the whole world to know that you partied hard, in a public post, but you want certain individuals to receive the news first.

The type of information that accompanies news of death. How important is it that the world knows how we died? Some causes of death are colored by stigma and taboos. And some people may simply prefer that the cause of death not be public information, regardless of what it is. We can be creative: there might exist a digital world where death messages might be encoded in digital time capsules, folded into riddles, mathematical puzzles, or original pieces of music.

Morbid as these details are to consider, they’re ultimately an act of gift-giving, as they show care for how those we care for grieve, and how the world grieves. Note how, in the case of public, viral video deaths, part of the tragedy is that the dead have so little control over their narratives, and that their loved ones were robbed of an intimate opportunity to grieve.

How we depart is an inseparable part of our stories. For a certain kind of person, the deaths of Chadwick Boseman and MF DOOM will remain as seared into their memories as the assassinations of MLK and JFK are to Baby Boomers and the murders of Tupac Shakur and Christopher Wallace are to many Gen Xers. Those announcements were only viral via television, radio, and word of mouth. In the era of social media, however, billions learn at the snap of a finger. The deaths of Boseman and Dumile offer examples of how, unlike the past, social media grants us some level of control over what the world learns.

As they showed, the manner in which deaths are announced can be an extension of the lives of the people that we revere. We admire Boseman’s resolve. He didn’t communicate the severity of his illness with the public, and continued to perform his craft at the highest level (his death announcement teased his final performance, in Ma Rainey’s Black Bottom) until the end. The irony that some have noted—a man forever well known for his performance as the king of Wakanda left us in a subtle, regal fashion, just as an Avenger would. Similarly, the way that Daniel Dumile’s loved ones told us about his death months after he was gone—with no cause of death, no circumstances, or any associated details—felt intentional, very much in character, and exactly how MF DOOM was supposed to leave us.

It hasn’t been the most comfortable experience, but planning my own digital post-death legacy, however small and insignificant it may be, has been empowering. I can’t control all the content that I’ve appeared in (lectures on YouTube, for example) or how my death is discussed, but I’d prefer it not take place within the fangs of an online comment section. I’d also prefer that my Twitter or Instagram accounts were forever closed—to me these are tools that the living use to build connections. With no new earthly bonds to build, I’d only be concerned that there be a simple relic—either a note or piece of art, sent out by a loved one, that announced my death and captured the moment. Crafting a digital death note is a chance to project one last message before I enter the essence, to be received by somewhere between no one and everyone, lasting from somewhere between a moment and forever.