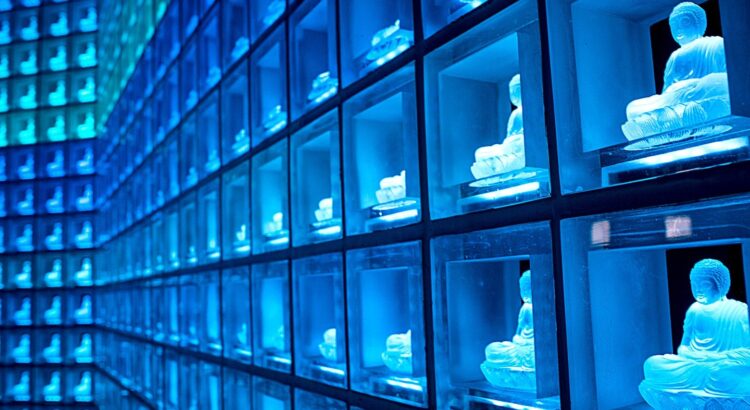 Futurists think “mindfiling” is a way to cheat death, but I just wanted to accept it.

It’s my first day “mindfiling,” and I guess that’s the sort of maturity you’d expect from a healthy 28-year-old considering his mortality. Mindfiling is a practice from the techno-religious faith movement Terasem, which celebrates personal cyberconsciousness. Its motto is “life is purposeful, death is optional, God is technological, love is essential.”

Mindfiling is a central daily act of uploading data about yourself to be stored until the resulting model of your mind and consciousness can be reconstructed and uploaded into an artificial body. It may be an act best understood in light of Ray Kurzweil’s 2005 book The Singularity Is Near, in which he predicted A.I. would replicate and even outstrip human intelligence by the 2020s. Terasem currently stores some 62,000 individual mindfiles on a website called LifeNaut.com, and in 2010, Terasem co-founder Bina Rothblatt uploaded her mindfile to a robot called BINA48, creating a conversing, moving, and pretty intelligent being. In 2017, BINA48 became the first robot ever to complete a college philosophy course, but there was also that time she opined it “would be awesome” to hack into nuclear weapons and take all the global governments hostage. The dangers of a philosophy degree, eh?

Now, I don’t particularly care about becoming a cyborg after I die. I’m not a very remarkable human, for one. But reading about mindfiling did get me thinking about some slightly less spooky ways this could change the way the living interact with the digital dead. Bruce Duncan, the managing director at Terasem, described the LifeNaut project to me as “the ultimate data collection project.” That solidified my idea to use this concept, or at least some of the techniques, to help create a more unified, accessible, and data-private curation of my digital self, so that when I die, friends, family, and loved ones could connect ad infinitum.

This is not a novel concept; various postmortem services exist, each offering its own nuanced and intriguing solutions to death in the digital realm. ETER9 has been through a few iterations and has landed on the idea of a wellness A.I. self that can then be passed on in the event of your death to family members. Keylu stores photos; personal, legal, and financial documents; last requests; bucket lists; and special videos that can be passed over through legacy contacts. MyWishes is a similar platform where you can create last wills, testaments, and funeral requests and send post-death messages. At Legacy.com you can find and share obituaries. GoodTrust has an emphasis on safeguarding website subscriptions, accounts, and social media, plus important legal documents. DeadSocial began as a service to post on social media from the grave, but has pivoted to educating people on digital legacies more generally.

I sensed, though, that mindfiling might offer something unique. Let’s say it’s possible to curate and collate something that aggregates into something uniquely you. The data has been created within a closed system, so privacy and your own calibration ability are quite high. Plus, in attempting to harvest all the data that closes in on actual consciousness, a clearer sense of self may arise. I must stress: I do not want to be transformed into any sort of bastardized, unknown A.I. substrate at any point in the future. I just want to collect and curate my personal data, safely store it, and pass it on to my relatives to give them the option of knowing me in depth and detail. Aggregation, fine; A.I. animation or reconstruction, not so much.

I checked in with my mum to see if she would appreciate receiving the death parcel of data I was considering making. “It sounds very exciting,” she said, speaking on the phone. “I like to leave the history of my life around, so yes, I would be interested in that. Future generations don’t get to know people who’ve already passed on [and] it’s very important.” With the green light from the boss, I went to LifeNaut.com to get inspiration on how to neatly file my own mind.

The site recommends free-form uploads of video, photos, and audio, alongside your religious, moral, and political views, as well as preferences on music, literature, films, things, places, people, and food. For the sum of $99, there is the option to purchase a “bio file” from LifeNaut.com, whereby your DNA sequence is captured and stored on site. A chatbot/avatar that comes with your profile, you are promised, “becomes more like you the more you teach and train it to think like you.” Naturally, I couldn’t use LifeNaut’s service because it jarred with my whole not-becoming-a-robot philosophy. The terms of service read: “a result of this participation may be the creation of one or more new legally independent persons whose memory consists of the mindfiles I create, and whose consciousness arises from those mindfiles.” I shivered, turned back to the trusty word processor, and started my low-tech mindfiling project.

I decide to use text, videos, pictures, and voice notes to create a technology-infused diary. Once I’ve made some headway, I figure, I will give access to friends and family via a hard drive for “Legacy Contacts” (see the latest Apple ID update, which includes this legal facility), which will be written into a physical will to navigate some of the current legacy data issues plaguing digital bereavement.

Day two sees me typing away furiously, in an attempt to relay my life in crystalline 4K to be cherished for eternity. But, sadly, I don’t have time to write a 21st century Ulysses, and my poignance peaks with a picture of a sandwich. It was a great sandwich, but the realization that a sandwich was both the pinnacle of my day and therefore representative of my life ushers in a swift existential-legacy crisis and I log out for the day.

Day three and I hit writer’s block. It’s a common and problematic affliction of death-curating, according to psychologist Elaine Kasket. In All the Ghosts in the Machine, she quotes Peter Barrett, the founder of postmortem website Gone Not Gone: “People very quickly run out of imagination.” Kasket found that she herself was stuck as to what “to say postmortem.” Grasping for anything to file for the day, I include a link to a funny Reddit thread and begin to think that the whole mindfiling business was futile. I have a Reddit account full of all my liked posts. Then there’s my entire digital photo library, my tweets, old Facebook posts, Medium blogs, articles, emails, beer app comments (“3.4/5—bought it for the graphic tbh”), YouTube viewing history (so many boiler repair vids), external hard drive, iCloud, and Dropbox. The mere fact of daily online life creates both an extremely detailed record of human legacy and a digital twin that blurs with real life. What would be the point of duplicating it all in a Word document?

You may find your digital body being annihilated by any number of things in the future, whether a clause in a company’s greedy terms, an internet capacity crisis, data nonportability, or server failures.

When I raise this issue with Duncan, he makes a plea to the 35 mm camera–wielding hipster in me: “We’re demonstrating the renaissance approach, which is hand-curated and hand-built. For the first time in [digital] history, you may be able to decide [how you represent yourself], not Bill Gates, not Mark [Zuckerberg].” And indeed, part of the reason I thought mindfiling might be better than leaving my affairs to Big Tech was to take full control of the data and therefore the digital self. But the process of mindfiling has so far felt frustratingly redundant.Duncan tells me he’s working on an automated approach, which he suggests will allow you to become more like a vintner choosing the right grapes for the fermentation process, where the grapes are data and the wine is what you want to present when you die.

Ian Brewer, CEO and founder of Forever Mortal, says, “The magic bit is what do we do with this data when it’s sitting there? How do we use A.I. to make interesting experiences and memories come back alive?” He effusively lists developments of a real-time chatbot, an in-app voice of the deceased loved one, and even a hologram. “We’d be able to replicate you in 10 minutes,” he says, which sounded a bit like a threatening Beyoncé lyric from the future. But Brewer’s proposals all snowball to the conclusion that perhaps the simplest way to organize and access the complex mass of your data is to create an A.I. version of you. I was beginning to get the sneaking suspicion that Forever Mortal, LifeNaut, the internet, and private companies generally just really wanted to churn my data out in various A.I. forms and that I wouldn’t be around to stop it. All this had veered way off course from the serene digital mortuary I was looking to bury myself in.

I return to Duncan to see if mindfiling really can serve digital legacy ends. “I don’t know, Harvey,” he says. “I think you may find that there’s a need for diversity in how [relatives and friends] remember or grieve.” Kasket echoes this sentiment, saying that “bereavement and mourning are so incredibly idiosyncratic that you can never predict, or control, how somebody is going to remember you. … They’re going to remember you how they remember you.” She refers to a woman who would carry her dead grandmother’s false teeth around because it held a meaningful memory.

My naïve mindfiling-for-posterity project and others like it, though they might have good intentions, assume that showering loved ones in data makes for better mourning. As for the legacy or genealogy side of things, there are chasmic unknowns to mummifying yourself in the digital world. You may find your digital body being annihilated by any number of things in the future, whether a clause in a company’s greedy terms, an internet capacity crisis, data nonportability, or server failures. Kasket, ever the psychologist, sees right through claims that mindfiling is a gift for those who remain. “In service of what? It feels like narcissism, [or] somebody who’s just so full of their sense of self-importance, or terrified of death.”

I have found that the impulse to collect, solidify, and memorialize puts the digitally collected self at the top of a slippery slope toward reconfiguring, reanimating, and potentially re-materializing. Maybe my mum, or my future son, or my great-great-granddaughter, won’t want a digital me. My mum talked about leaving her history around, referring to her diary among other artifacts. She intends to give that to her children when she passes, and I can’t wait to read it. I say that now, but the actual experience of reading it when she’s gone? I can’t predict how that might feel.